Today I'm feeling fantastical! It's no secret that my favorite genre in prose is fantasy, and it bleeds into my poetry often. Mythology is a huge influence in my writing as I've spent a lot of time studying retellings of stories.
Hermes was the great messenger of the Greek gods, but the lesser known golden-winged messenger god was a goddess. Her name was Iris and she was the goddess of rainbows. She had a twin sister named Arke, but Arke didn't have her golden wings and is only the second lighter rainbow that you sometimes see. Arke in her jealousy betrayed Olympus and became a messenger for the gods. Now there's a good story right?
For your subject prompt today, think about messengers, and even use the story of Iris and Arke if you want. How do you think those sisters were feeling? What really made Arke leave? What was the message?
Now for the fellow form challenge lovers.
Today isn't as hard either. I bring you, the nonet! The nonet is a form as old as time, though some people think it originated in France.
The form is super easy! Your first line has 9 syllables. Your second line has 8 syllables. You keep going like that until you reach your last line with 1 syllable. It's like a Haiku on steroids. 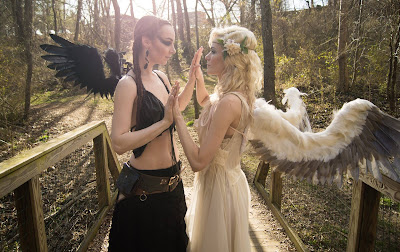 From me (Fire & Spunk Productions)

When Asian-American poet Beverly Tan was 7 years old she decided she wanted to be a filmmaker. In 2015 she became an internationally award-winning screenwriter, producer, and director. Along with her films, Beverly was fueled by a passion for writing and proving that her childhood dreams really can come true.
She currently splits time between Raleigh, NC and Denver, CO, though her cat lives in Raleigh full time.
Follower on IG/Twitter @BeverlyTanFilm
You can buy her book Water in a Wineglass on Amazon
Posted by Unknown on October 23, 2017